WHAT IS A SOFT STORY?

A soft-story residential building is one that has open parking or commercial space on the ground floor with residential upper floors. They are usually 2-4 stories and have been built prior to more recent earthquake codes.

The issue with having a first floor that is structurally weaker than the more rigid floors above is that these buildings become subject to large side-sway and are susceptible to collapse or damage beyond repair in large earthquakes (see picture below). 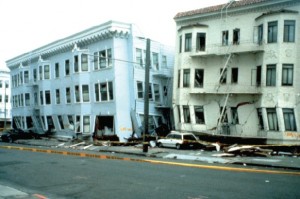 Recent studies done by Bay Area governments show that in a large earthquake on the Hayward or San Andreas fault, a majority of the uninhabitable housing will likely be in soft-story buildings.

The risk of soft-story buildings is property damage, loss of housing, and potential loss of life in the case of collapse. 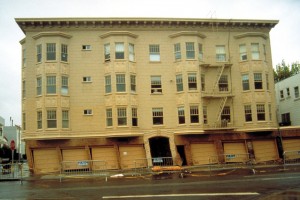 WHAT TO DO ABOUT IT…

For smaller wood framed soft-story buildings, the easiest retrofit is sometimes adding plywood shear walls or pre-manufactured shear panels. Since adding walls may disrupt the open space and challenge the existing parking on the ground floor, this solution is not always an option.

Another common solution in retrofitting soft-story conditions is adding a steel moment frame or steel moment columns. This is most commonly used to preserve the existing parking spaces of the building (see picture above). These structural elements are designed to take the lateral forces of the earthquake on the open/weak side of the building.

There are a couple other possibilities, depending on the building geometry and retrofit criteria. But regardless of the design, these seismic retrofits would need to be prepared by a licensed civil or structural engineer.

Soft stories pose a great risk to cities because if many of these buildings collapse, there will be a large loss of housing and a greater strain on post-earthquake recovery.

Bay Area cities have taken measures to determine how much inventory they have of these soft-story buildings. The ordinances are to alert the general public of these buildings’ vulnerability during large earthquakes and provide incentive for retrofits that make the buildings more safe.

Below you will find some links to some of the Bay Area Cities’ soft-story programs. For further information or discussing the options of what to do with your building, give me a call. I’d be happy to consult with you and discuss the possibilities.

In this part 2 on Buying a New Home, I’m going to speak to some of the important considerations of the site that you’ll want to know about before buying your new home.

The type of soil found on the site of the home is important to the stability of the building for numerous reasons. Some soils, like clays, are more susceptible to sliding, especially when rain lubricates the different layers of the clay. Soft soils, like those located near the bay, can become saturated during an earthquake turning the soil into quicksand and damaging a building.

The type of soil also affects the intensity of an earthquake shaking in a seismic event. Softer soils, like those found alongside the bay and in landfills, will amplify ground shaking and cause more damage. Structures built on bedrock that are near a fault have shown to perform better in earthquakes than those built on looser soils much further from the epicenter.

The considerations for buying a home on a slope are usually greater than those that are not. It’s imperative to know if you’re in an area of an active landslide or creep zone by either looking at landslide maps from the city or consulting a soils engineer. Poor grading during construction can also create a localized landslide that is more difficult to detect and wouldn’t be on a landslide map. As mentioned above, earthquakes can also cause hillside soils to move that would otherwise be stable and thereby increase the potential for a landslide.

It’s a good idea to contact a soils engineer if you are purchasing a property on a slope or a hillside, or atleast contact an engineer to assess whether a soils professional would be necessary. Local soils engineers will often know where active slides and faults are located and can provide essential information on how these hazards may affect your home. For some resources of your own, see the bottom of this article.

The greatest risk to a building near a fault is a ground-surface rupture beneath it. This is a major risk for homes that straddle a fault and one that no building can withstand. It is thereby very important to know how far any new home is from any active faults. For ones that are close, it’d be prudent to get it checked out by a soils engineer or geologist with adequate maps to local any traces of the fault.

I hope this gives you a basic idea of what to look for on the site of your potential new home. If not, please contact me for for a more in depth look at your home.

MAP OF THE ACTIVE TRACES OF THE HAYWARD FAULT

When buying a new home, it is important to know the many elements of the site and building that you’re buying. In this part 1, I’m going to speak to some of the important structural building elements that you’ll want to look into and know about before buying your new home.

The foundation is one of the more major structural elements of a home. Replacing or retrofitting a foundation can cost tens of thousands of dollars, so it’s important to know what you’re buying and all foundations are certainly not created equal.

In looking at the foundation, I’m wanting to know whether it’s bolted, what the quality of concrete is like, and whether there’s any cracking as a result of foundation movement. For more in depth information on foundations and what to do with the different kinds you may find, see the following two articles: Inspecting a Foundation and What to do with my Foundation.

The actual framing members of the building (floor joists, roof rafters and studs) are usually not exposed as they are hidden behind sheetrock and other finishes. If I could get a look at the framing, I’d want to see that they are in tact and have not been affected by a leak, fire, termites, or other cause.

The inside of a home can give you a lot of information about how the structure has performed over time and how well the building has been constructed. For example:

In case of an earthquake, it’s important that you have a motion sensitive automatic gas shutoff valve, that the water heater is strapped, and the chimney is reinforced or supported. Some cities, like Berkeley, will even refund you some of their county transfer tax for doing some of this work. See the article on Earthquake Retrofits and Berkeley’s Seismic Retrofit Rebate Policy.

I’d also want to know if any of the additions and remodels on the house were done with a permit or not. Since jobs done without a permit won’t be inspected by city building officials and are less likely to be inspected by the design professionals, the construction is sometimes not up to code and the quality is often inferior. You can gain access to the public records of a building down at most city building departments.

I hope this helps give you an idea of what I’d be looking at as an engineer when buying a new home. For part 2 of this article about the building site and potential hazards, see Buying a Home Part 2: The Site.

A Guide to reinforcing/retrofitting an existing foundation

(This is a follow up to the article titled: Inspecting a foundation)

Sometimes there is a combination of the previously outlined issues (see Inspecting a foundation) and it isn’t clear what needs to be done, if anything. A main criteria of an existing foundation is to be able to hold the epoxy retrofit bolts and anchor the structure to its foundation. The best and cheapest first step for foundations that are difficult to visually assess is to install some anchor bolts in them and test them. They can be tested with a “torque test”  or “pull test,” whereby a certain amount of torque/tension is applied to the bolt. If the bolt can hold in the foundation without breaking or cracking the foundation, then the connection is sufficient and the foundation will most likely serve its purpose during an earthquake. Most foundations however, can be visually assessed.

Making the decision on what to do with your foundation also depends on your performance criteria. If the cracks in the wall and sloping floors are the only issue, you may not choose to replace or reinforce your foundation. However, if you wanted to put new tile in the bathroom or other finishes more sensitive to movement, you may elect to have a more stiff foundation that requires some work.

I’ve outlined some options below on what can be done with an existing foundation.

Reinforce: There are numerous ways to do this and the best solution will be based on site conditions, access for equipment, and performance criteria.  Some options are installing bench piers every 6′-8′, capping the existing foundation with fresh concrete, creating a concrete curtain wall on the inside of the existing foundation, and even pouring drilled piers in the case of more extreme movement.

Replacing: A new one is almost always the most expensive and best performing option. Though costly and labor intensive, a new foundation will last the longest and could save major damage to your house. Replacing a foundation also gives you the chance to add new drainage alongside the new foundation if water infiltration and expansive clay soils have been an issue. It some circumstances, it is also possible to replace only portions of a foundation.

Not doing anything: Always an option and sometimes just a fine one. Some foundation “issues” are often more aesthetic than they are structural problems, such is the case with settlement. It would be important to keep an eye on the foundation over the years.

If you have more questions about your property or project, feel free to give me a call. I am happy to consult with you.